Apga The Trials Tribulations And Triumphs 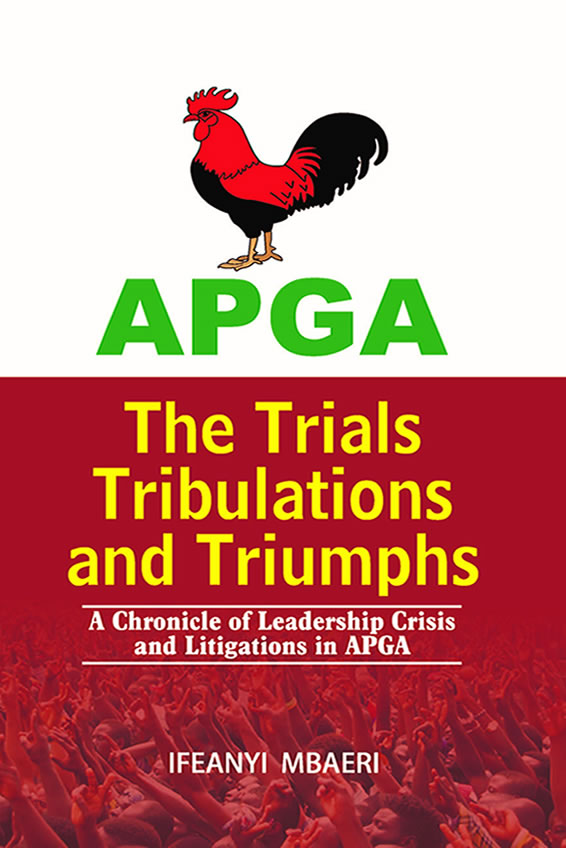 APGA: The Trials, Tribulations and Triumphs


Turbulence in political parties is seldom documented in one piece. Available accounts of travails that besieged some political parties in Nigeria in the aborted First and Second Republics were either poorly written or random and haphazard. In addition, the annulment of the famous June 12, 1993 Presidential Election, believed to have been won by Chief Moshood Kashimawo Abiola, by the Military Junta truncated the Third Republic and left political parties in disarray. With 19 uninterrupted years of democratic practice in Nigeria since 1999, the Fourth Republic has witnessed an increase in political activities leading to both heightened cacophony and harmony.

In 2002, for instance, APGA was registered as a political party and took part in the 2003 general elections. But by December 2004, the party had been engulfed in debilitating leadership crisis.

Documented in this tour de force of a book is the legal odyssey of APGA - A journey of court trials, political tribulations and far-reaching triumphs. It all began in January 2005 and has continued unabated till date, except for occasional lulls before another storm erupted. As a fact to this ebb, remnants of recent legal storms in APGA are still in various courts at the time of going to Press.

The re-election of Governor Willie M. Obiano in the November 18, 2017 Governorship Election in Anambra State was the icing on the triumph cake of the party. In an unprecedented fashion and under my watch as National Chairman, the party recorded a 21/21 victory in the election, sweeping the polls in all the 21 Local Government Areas in the State.  It was such a landslide victory, aptly dubbed mudslide by many. While the opposition parties were reeling from the unnerving impact of the 21/21 victory, my predecessor, Senator Victor Umeh, OFR had an astonishing 7/7 victory in the Anambra Central Senatorial District court-ordered fresh election of January 13, 2018.

The triumph of APGA in Governor Obiano and Senator Umeh’s victories, however, did not come easy. APGA was buffeted in all fronts with trials and tribulations in the build-up to the electoral victories. These trials and tribulations have all been documented in this reader-friendly book. It is a front-row account of an insider that saw it all from the vantage position of a lawyer and a national officer of the party. It is a remarkably resilient 13-year journey of an embattled political party in a fledgling democracy.